A Rare Perspective on Representation 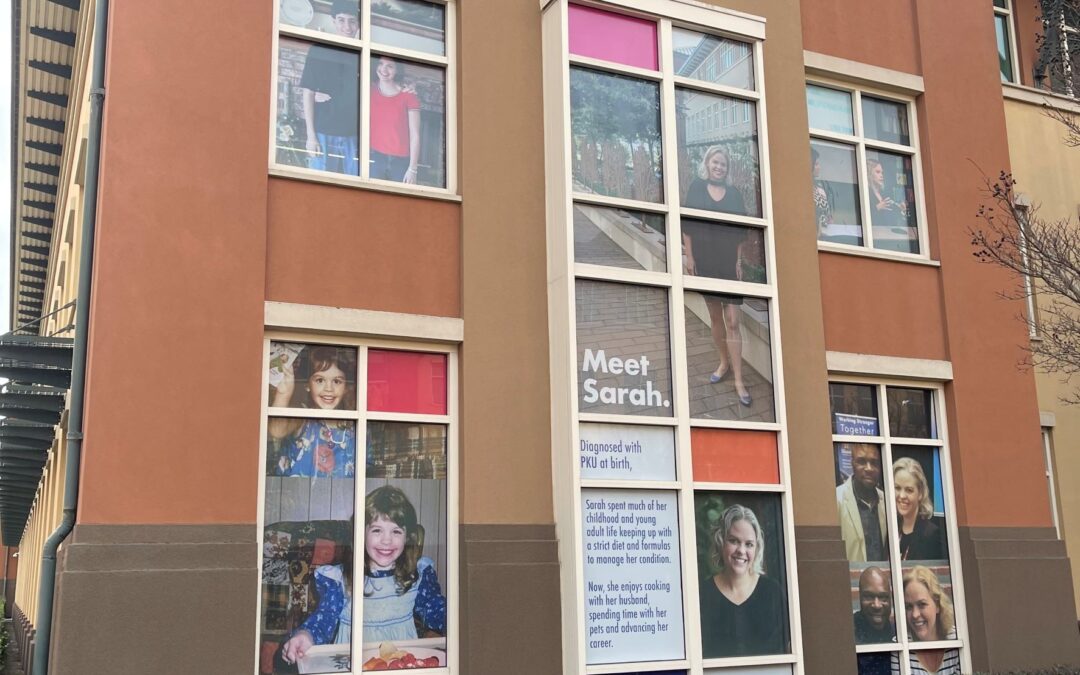 Yes, the person featured in the collage of photos on the side of the building is me, Sarah Hope Marshall. The building is Biomarin Pharmaceutical’s headquarters in Novato, California.

The picture may look like an awareness campaign. When I see this wall of photographs, I see why representation matters.

Let me share my story. I was born with a rare genetic disorder called Phenylketonuria, more commonly known as PKU because the full name is long and difficult to pronounce. (I prefer the full name — its complexity conveys the seriousness of the condition). This condition means the body cannot properly break down an amino acid in protein. When excess protein is consumed by someone with PKU, it causes neurological problems.

PKU was first identified in 1934. However, the disease requires lifelong treatment beginning at birth. In order to prevent severe outcomes, treatment must be initiated before the brain begins to develop. The  newborn screening test that identifies PKU and other genetic disorders was not developed until the 1950s. It was not federally mandated as a hospital procedure until the 1960s.

There are individuals alive today with PKU who missed being diagnosed at birth. During the 1970s, PKU was the second leading cause of institutionalization in Ireland[1]. If you spend a few minutes doing a search on YouTube for untreated PKU, you would find video footage of patients who are non-verbal and autistic because they missed early treatment for the disease.

I have lived through medical history. I was born in 1979. At the time, the only available treatment for PKU was a highly restrictive medical diet to limit the amino acid that caused harm. My prescribed treatment was a medical formula and a daily limit of seven grams of protein.

However, medical doctors removed children with PKU from their restrictive medical treatments at the age of eight because it was believed the brain was fully developed and could no longer be damaged. Before I turned eight years old, doctors began to realize the disease may have longer-term impacts and changed the recommendation to age twelve. But it was only a strong recommendation, and was not yet a universal treatment protocol.

I was blessed to be treated at one of the best genetic clinics for PKU in the country. Genetic doctors had learned even more about the disease before I turned twelve, the recommended age to discontinue treatment.  My doctor recommended that I continue the dietary medical treatment that would keep my brain healthy for the rest of my life. Although I struggled with treatment compliance, I was never removed from my medical diet.

The PKU medical diet is impossible for a person to maintain perfectly. People who were given the option as children to discontinue diet did so because of the social isolation, financial expense, the difficulty of compliance that accompanied the strictness of treatment, and because they trusted the current advice of medical professionals.

Many adults with PKU that are over age forty now had been taken off medical treatment as children. Untreated PKU has immediate impacts that mirror other mental health conditions or ADHD, but neurological decline can also be gradual. The adults who were taken off diet suffer the consequences of not receiving medically necessary treatment for the duration of life. Many have developed cognitive problems, ended up on disability, or struggle to maintain a strong quality of life. Nearly half of all adults with PKU are not receiving appropriate medical care.

As an adult in my forties, I am a rare exception for having maintained medical treatment over the entirety of my lifespan. Being that rare exception meant that I did not have any role models growing up. Of course, there was no shortage of white female role models in the world to look to for general examples of success. They may have looked like me, but not one of them shared my non-apparent disability.

All the women with PKU in the world who were five-to-ten years older than me had been taken off medical treatment and lived with various stages of cognitive decline.

I did not know anyone with PKU who had gone to college, who managed a successful career, or who excelled in anything at all for that matter. Every accomplishment was uncertain.

As a younger person, I searched for examples of people like me who could prove the possibilities. I did not find any. Not one.

Every successful woman I ever saw did not have to navigate daily landmines of a complex medical diet, the social isolation, and the corresponding neurocognitive challenges.

And yet, I wanted to be successful. Maybe that is why I was so driven as an individual, and worked so hard to maintain a rigorous treatment. I have completed not one, but two Masters degrees. One of my Masters degrees is from the University of Chicago, a school that at one time I would never have dreamed was in reach. I have been a credit union CEO, spoken on national stages, given a TEDx Talk, served on state and federal government advisory boards, and launched a management consulting company.

Medical treatment advanced throughout my lifetime. By the time I was ten years old, children being born with this condition knew they would need to maintain medical compliance for the duration of their life.

As a result, outcomes for people with PKU continued to get better. Even though the restrictive medical diet continues to be a struggle for many people with this condition, quality of life outcomes vastly improved.

My picture on the side of a building means no child born with PKU today will need to wonder whether they have the potential to become a CEO or go to a top-tier university.

Although medical barriers still exist for people with PKU and other rare disease communities, the possibilities have now been proven.

Individuals born with PKU just a decade after me (the ones who were never given permission to cease treatment) demonstrate the ability to achieve incredible success. I have met PKU adults who hold PhDs, work as nurses, film-makers, developers, and are accomplished athletes, bodybuilders, honor roll students, and more. All of them are younger than me — most by at least eight years.

I know why representation is so important. Not just because I wish I had seen more examples of people like me in leadership roles, achieving and accomplishing anything they set their minds to do.

Because without representation, we miss the perspective of potential. It truly matters. Representation points out possibilities. Although being the first person to accomplish something is always rewarding, it also helps to know there is someone else who has already done what we want to do. I will not get to know what it is like to watch someone older than me, with my condition, be a mentor or example. If I had, it would have given me hope. Hope matters. It keeps people going, drives them to keep experimenting, and creates social change.

I have seen medical advances that improved the quality of my life, including the 2018 FDA approval of a gene therapy that reduced my daily burden of care drastically. This means I have experienced history in ways that medical professionals cannot witness until they have several decades of career experience. Representation can mean bringing historical knowledge to the table.

Real, lived experience is a more intimate type of knowledge than credentials. Lived experience does not undermine practical expertise and professional achievement, but it is different.

Representation broadens perspective. When a demographic has a voice and a stake in the outcome, it changes the conversation. Whether this perspective is brought through generational, gender or racial diversity or patient perspective, representation moves out of our silos. It helps us think bigger, make culturally competent decisions, and achieve innovation.

I know why representation matters because I know what the world looks like when it is missing.

Creating societal change toward a more equitable, just society is multi-faceted. Representation is a metric that matters, but is most effective when it is the organic result of authentic relationship rather than an end unto itself.

Manage Cookie Consent
To provide the best experiences, we use technologies like cookies to store and/or access device information. Consenting to these technologies will allow us to process data such as browsing behavior or unique IDs on this site. Not consenting or withdrawing consent, may adversely affect certain features and functions.
Manage options Manage services Manage vendors Read more about these purposes
View preferences
{title} {title} {title}